how we use chemistry

to freshen the air 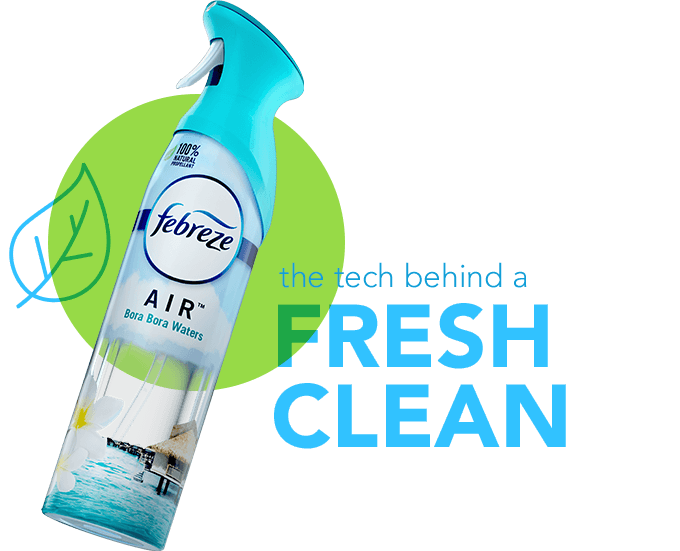 Don’t settle for masking odors—Febreze has the technology to fight bad odors at the source. The good news: Fighting odors isn’t rocket science… but it does take a little bit of chemistry know-how to do it right. Read on to learn why the technology in Febreze is designed with the safety of you, your family, and your pets in mind.

No fluff in your fresh air! Febreze gets to the point on fighting odor… down to the molecular level. We found four enemies to stinky smells and combined them (science!) to fight bad odors. You might be surprised to recognize some of them:

Find it in: It’s the bubbly in your club soda, and the fresh zest in citrus and pine needles.

What it does: These zesty molecules fight bad smells by balancing out their pH (so they become as neutral as water).

Find it in: summer sweet corn and potatoes

What it does: This donut-shaped molecule traps odors in its center.

Find it in: Febreze! This polymer was specially created to tackle odors in hard-to-wash fabrics.

What it does: This odor magnet digs deep to draw out odors, then traps them while releasing bursts of freshness.

Find it in: Flowers, fruits, and fresh rain! We re-created natural scents in Febreze by replicating their molecular composition.

What it does: These various perfume molecules react and bind to bad odor, thus forcing them to change their stinky ways.

natural or synthetic: Is there really a difference?

Often, there is no difference between natural and synthetic ingredients; that’s why many of them are called “nature identical.” Yep, the ingredients used in our air fresheners are identical to their natural counterparts. When examined under a microscope, they look exactly the same. So when you smell a lavender fragrance molecule that’s created in a lab, it’s indistinguishable from the scent of lavender growing in your yard.

Febreze takes a responsible approach to fragrance, opting for synthetics when choosing a botanical that could be harmful to the environment… or even strip away a rare plant species.

A molecule from a fresh orange vs. the orange essence used in Febreze

So now you know: There’s no secret to the stink-busting power of Febreze. Just good, clean science. Doesn’t that feel like a breath of fresh air?

is Febreze safe to use?

how to use febreze

is Febreze safe for pets?

get a peek inside the bottle